After month of silence:
During the last month I was completely engaged in getting the ROOT client working with Naradabrokering and Clarens so that the Physicist can submit and monitor analysis jobs collaboratively. It was not just another implementation problem, but a implementation+integration task which requires different hetrogenous components to work together. The user case that we tried to achieve.
With a month of work I was able to implement a Client software written in ROOT language that can achieve all of the above requirements. We were able to show this demonstration during the Supercomputing Conference 07 in Reno Nevada. The following image shows the software while executing an analysis on files located in three different servers. 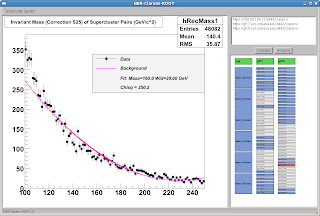 Some explanation about the software:

Few Implementation Details:
The GUI is completely written in the interpreted language provided by the ROOT framework.
It uses a C++ bridge for Naradabrokering and C++ client library for Clarens server internally.
It also uses a python script to submit analysis tasks to multiple Rootlets (A concept similar to Servlet) concurrently. This is especially required because the interpreted ROOT language does not support multi-threading.
Posted by Jaliya Ekanayake at 9:17 PM No comments: