As part of my ongoing research on various parallelization techniques, I implemented a MapReduce version of a MDS program. My colleague Seung-Hee Bea has developed the in memory implementation of MDS using C# which runs on a multi-core computers. As the first step in converting that algorithm to a MapReduce implementation, I implemented a single threaded version of the same program in Java (since I am planning to use CGL-MapReduce as my MapReduce runtime). I ran this program to reduce 1024 four dimension (4D) data set to a 3D data set and measured the execution time of the different parts of the program. The result showed that 97.7% of the overall execution time of this program is used for matrix multiplication (both square matrices and matrix and vector multiplications).
This observation motivated me to first implement the matrix multiplication in MapReduce and parallelize the matrix multiplication part of the entire computation using MapReduce technique. I developed both square matrix and matrix and vector multiplication algorithms using CGL-MapReduce and incorporated these to the MDS algorithm.

I tested this MapReduce version of the MDS program using 1024 and 4096 points data sets (4 dimensional data reduced to 3D data) and obtained the following results. The data I used has a predefined structure and the results show the exact structure of the data. In addition the results also tally with the results of the single threaded program. So I can reasonably assume that the program performs as expected. The program performed the MDS on 1024 data set in nearly 11 minuites and the 4096 data set in 2 hours and 40 minuites. 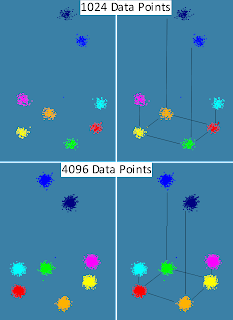 The current MapReduce implementation of the MDS algorithm handles only the matrix multiplication in the MapReduce style. However, I believe that we can come up with a different algorithm which will allow most of the computations performed in MDS to be performed using MapReduce. This will reduce the amount of data that needs to be held in-memory by the master program allowing the MDS program to handle larger problems utilizing the total memory available in the distributed setting.
Posted by Jaliya Ekanayake at 12:38 PM 1 comment: